I'M JUST WILD ABOUT POPPY...And I Know That I'm Gonna Have A Crush On CHIP! 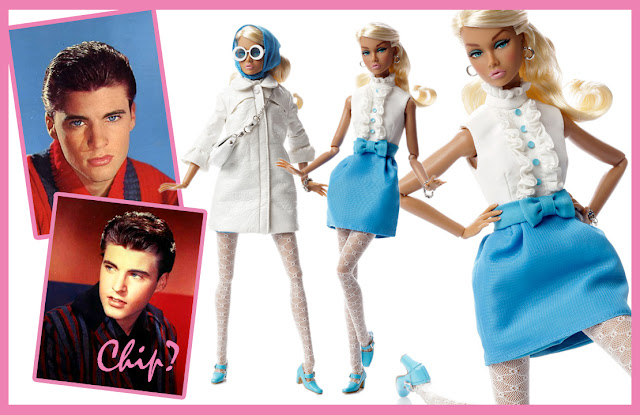 By now most of you know that our wonderful Teen Fashion Model in New York City is having another character introduced into her world. Of course, I'm taking about none other than our positively perfect Poppy Parker - and the new character that is going to be introduced into her life is a boyfriend! That's right, CHIP is coming on the scene in 2012 and I'm hoping we will get a good gander at him in the next online Toy Fair Event!

As you remember, last year Poppy became friend with the delicious young music diva Darla Daley. And, since their first meeting Darla has gone thru some...ahem....changes.

I love the new Darla...but then again...I liked the old one too! I'm not hard to please...just ask any of my ex-boyfriends (rimshot....I mean the drums...dirty minds! lol) I loved the giftset that introduced her at the convention named Simply Simpatico (which reminds me of a line in one of my favorite films The Trouble With Angels with Haley Mills and Rosalind Russel, but I digress). And, I can't wait to see the new version of "Hit Single" with the new face mold. I took a quick look at her in the museum room at the convention and fell in love. Isn't it incredible how beautiful these dolls can be in person? I mean really! Sometimes the pics just doesn't do them justice! I know I've ordered my H.S. Darla....but enough about Darla. We'll talk more about her when she makes the scene again early next year.

Let's focus our attention again on matters that MATTER - A MAN!
I'm so glad that the IT designer's and David Buttry especially is going to be designing Poppy's new beau (or is it her old beau...not sure of the story yet). I personally hope that he looks like 60s TEEN DREAM RICKY NELSON from the Ozzy & Harriet Show (featured in picture above with Sweet Confection Poppy, due out hopefully by the end of the year)!

I can't wait for all the different variations of him to come out too - brunette, blond, raven! I hope the designers at IT change out his hair color as often as they would their own undies!

So tell me what you think?
Are you excited about CHIP?
Do you hope there will be more than one version out this first season?
What TEEN DREAM do you hope they modeled him after? Fabian? Frankie Valley? Frankie Avalon? Gosh, I guess I never noticed how many heartthrobs names start with "F"!
Hmm, interesting....can't wait to hear your feedback!
Tell your friends about the fun you are having on the blog! And become a member or follower if you haven't yet!
Toodles Poodles!
xoxo,
Frank
p.s. notice my name starts with an "F" too! I'm just sayin'.... ;-)
Posted by dolldork at 3:04 PM