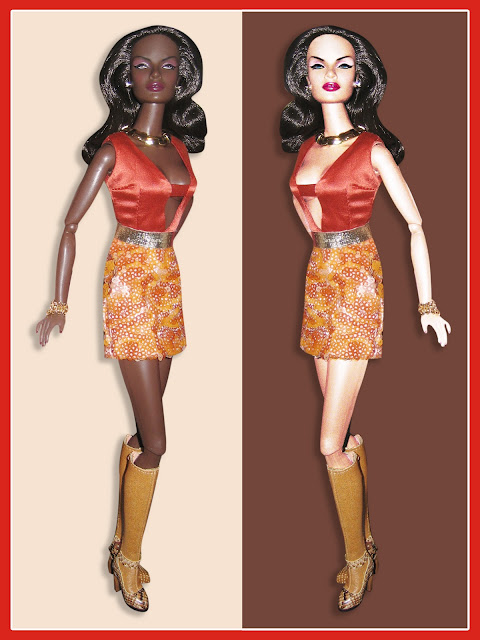 Earlier today I was reading an entry on Flickr from someone who had taken a picture of an endcap full of ethnic Princesss dolls at the Disney Store that were put on "Clearance" after the holidays. Although, Tiana, Pocahontas, Jasmine and Mulan were now available half-off, their white counterparts Ariel, Cinderella, Tinkerbelle and (yes) Snow White were still full-price. What message does that send to consumers I wonder? It's obvious - what it says visually is that "white" is desirable and therefore more valuable than brown. I take great great offense to that. No wonder we have millions of young women (and men) of color that have self worth issues when we have examples like that one slapping them right in the face....AND FROM DISNEY NO LESS!

Now, I'm sure there is a logical explanation for this "mistake". Being a latin person and a business man myself I try not to read too much into these things. I know that when too much quantity comes up under a certain skew number store computers automatically put certain merchandise on the "clearance list". But, it is up to the store managers to make the final call. Anyone with half a brain can see that segregating the dolls sends a VISUAL message to anyone walking through the store. For the most part, I haven't ever made a big deal about this in the past even though I've witnessed it at Target, Walmart...etc. I mean, in the end, those of us who like ethnic dolls (HANDS UP YVONNE!) we get to purchase these lovely ladies at a fraction of the price of their fair skinned counterparts. But, I still feel a knot in the pit of my stomach when I notice this blatant (yet subtle) type of racism.

This phenomena is not just regulated to the lower end "playdoll" markets either. Unfortunately, it goes on in the collectible market as well. Wonder why we all have to rush and put in a pre-order for Poppy but can wait for months until Darla to go on sale? Some may make the argument that there are just not as many people of color that collect high-end fashion dolls. I say BALLS! We all continue to fall into the trap that society, the world of fashion and the media sets up for us - Blond is Beautiful....Black is Edgy...at best!

I commend companies like Integrity Toys who no matter what continues to produce dolls of every ethnicity under the sun. They could very well produce only limited quantities of dolls like Annik or Nadja and overproduce girls like Imogen and Eugenia....but they don't. Therefore they deserve a standing ovation for that! Hell, I bet if they did start limiting the quantities they would create a "pseudo" collectible in their AA doll (a la Black Francie), but I'm glad that they are not that shallow. I was pleased when mocha colored Isha was one of the breakout stars of the 2011 FR line. She went just as quick as Dasha or Vanessa. But, it is sad for me to surf the net and visit the sites of my favorite dealers and see that Dominique from the FR2 collection (one of the most beautiful doll sculpts designed in years) can be bought for a song. It is equally disappointing when on eBay old Adele's don't match the desirability that Veronique does. And, don't think that Kyori fairs much better! Sigh....it's really sad, but it is a reality.

I say that we must continue to support doll companies like IT that hold their ground on this taboo subject. The fact that they put their money where their mouth is and celebrate the subject of DIVERSITY is really a remarkable fact. I hope that they continue to lead the way and that their continued success will allow them to have the last say on the matter once and for all.

Vanilla OR Chocolate? Personally....I like a girl and a swirl with some FLAVA! So dip it twice...OK!


Please chime in with your thoughts...I'd love to hear them!


All the best,
Frank
Posted by dolldork at 5:33 PM