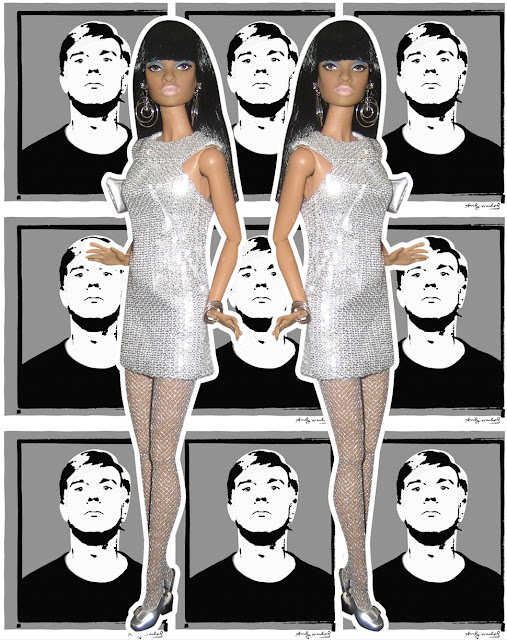 I've always been a fan of Pop Art.
It has inspired my personal aesthetic. I love bold colors with strong boundaries. One really can't speak of the Pop Art without mentioning the father of the movement  - Andy Warhol.
I was asked once in an interview who would be the five people that I would invite to my first dinner party in Heaven and I said - Marilyn Monroe (cause I think she would be a fabulous fruit fly and a good friend), Rock Hudson (duh HOT), Coco Chanel (fashion icon and I bet would be fun when she was drunk), God (so he could explain the Big Picture) and Andy Warhol (because in my opinion he was a genius before his time).
Andy became a house hold name during one of the most conservative times in our recent past. I believe he ushered us into a new age. He predicted Reality TV, he started our obsession with Celebrity (see the amazing Interview Magazine) and always knew where the best parties were going to be held  (see Studio 54). But, I think to understand the man you have to see how he lived, how he worked and who HE was inspired by. That's why I think that everyone who is even mildly interested in that period of history should rent the documentary "The Silver Farctory".
The Silver Factory was the name of Andy Warhol's New York City studio, which had three different locations between 1962 and 1984. The original Factory was on the fifth floor at 231 East 47th Street, in Midtown Manhattan. The rent was only about one hundred dollars a year, but the work that came out of those silver foiled hall decorated with mylar balloon furniture was astronomical and would influence art, fashion, society and culture in general.
I loved this new Poppy Parker outfit called The Happening for many reasons. One, I've always loved the vintage Francie outfit Silver Cage Dress and two, it's name just like my Mag! But the truth is, I've always wanted to be able to have a vintage Black Francie to model that particular fashion in my collection. I've just never found either in a condition (and price) that I acquire. But, now that Darla Daley is on on the scene, I immediately gravitated towards her. Poppy and Darla (to me) are like the happy mid-ground between Mod TNT Barbie and Francie - only infinitely more realistic, pose-able and well-made. I feel that is one of the reasons that my collection has gravitated towards Integrity Toys. Not only am I interested in the fashion but the quality of the production and the artistic value of the collectible. I feel that my IT dolls are works of art - which brings me back full circle to Andy. Andy made common place things like Dolls into ART (can anyone say Tomato Soup Can?) We see things differently in our culture because people like Andy and his peers during that special time in our history. They put a spotlight on the "things" we surround ourselves with everyday and find the beauty in all of it.

FUN FACT: Andy was also a collector. He loved Mamie Cookie Jars, Navaho Rugs and a sundry of other things that went up on auction several years after he died. It took several years to catalog not only all his art that was left in different stages of completion but also all his belongings that had he not been rich and could afford the room to house he would be considered a hoarder by today's standards (only he had good shit!)
Oh well....that's all I've got for today ;-)
xoxo,
F
Posted by dolldork at 10:25 AM