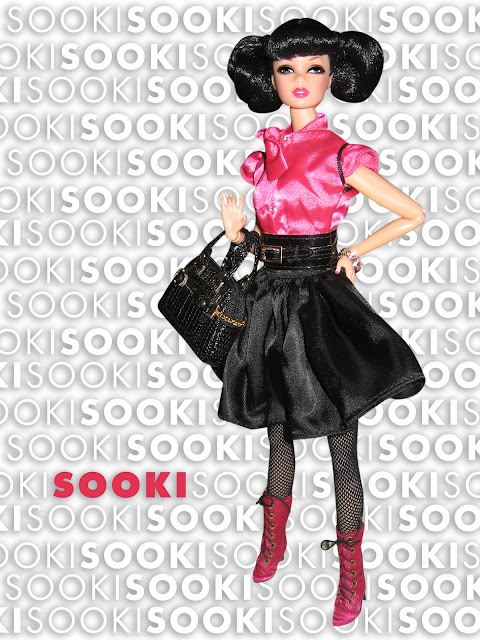 My first FR Convention was held in 2009 in Chicago. I'd long sworn off going to doll conventions for decades because of a horrible experience that I'd had many moons ago with a nutty doll club (who will remain namless) that worshipped another brand of vinyl diva. It was the 90's. I didn't know any better.

I'd met friends David Buttry and Ken Gibert at a comic book convention (FUN FACT: David and Ken also collect comic books! David collects Archie's and Ken collects DC Superhero titles) where through our magazine www.WhatsHappeningMagazinecom,  my partner Peter (who also collective Superhero titles...both Marvel and DC) were sponsors of the show. We had decided to take several of our dolls and action figures to the show and sell at the table that we were given for being sponsors.  We really weren't collecting much anymore and had decided to get rid of anything we just "didn't love". Little did we know FATE had other plans in store for us.

After perusing our table for a couple of minutes, I noticed that Ken had a Silkstone doll in his bag and I asked him,"Are you a doll collector?" To which he replied in his cheerful southern drawl,"Shoot gurl, yes!" At that moment I knew Ken and I would be lifelong friends. He then introduced me to his partner David and explained that he was a doll designer working for a company called Integrity on line of dolls called Dynamite Girls. We exchanged cards and promised to keep in touch.

After a couple of days of recovering from the show, I looked up David and Integrity Toys and find out that he was the designer of a line of dolls called Monsieur Z too. Well, as a graphic artist, I'd heard of Monsieur Z and was excited that they had designed a line around the popular pop-style artwork. I vowed at that moment to find them and get myself a set...especially since I'd just met the sweet man that was the designer.

Fast forwarding the story a year, David, Ken, Peter and I became fast friends. I cautiously joined their doll club and was thrilled to finally meet NORMAL people that were into the same thing I'd loved so long ago. At that point David also told me about going to the WClub Convention that was going to be taking place in Chicago in the fall. I had not had good experiences with conventions in the past, but I politely said,"Thanks for letting me know. I just might go if time permits."

Little by little, up until the time of the convention I began to collect the brand NEW line of dolls David had designed called the Dynamite Girls. I loved the concept right away. Fabulous, fashionistas with a flair for retro-style! I was hooked immediately! I latter decided, that I would go to the convention only in my friend, David Carr would go. After nagging him for days, we got ourselves on the waiting list and were sure that it was too late to go...but at least we gave it a try. Low and behold, Alain Trembley contacted us and let us know that there was room for 2 more at the convention and WE WERE IN!

I was especially excited because for the first time there was going to be a Dynamite Girl Design-A-Doll workshop. Of which there were going to be several dolls that were going to be exclusively produced just for the event in limited quanities (btw: I have JennFL to thank for that tidbit of info. Jenn was my shirpa the first year in convention. Without her David Carr and I would not have made it!)

I instantly spotted the girl that I loved from across the table. There she was, my favorite facemold - Sooki with raven colored hair and two pig-tails on either side of her head that reminded me of Buffy from vintage TV show Family Affair (if you don't know who that is...God YOU are young! Google it!). When I reached to get it, I saw a beautifully manicured hand reach down and SNATCH it away, faster than a metal piece of a "jacks" game off a hot sidewalk. This stunning, statuesque woman had her in her hand and gave me a smile as if to say,"Too slow 'mo!" I was crushed. I truly wanted that little bit of heaven, but it was just not to be. (By the way, I've since met this person and she is a sweetheart. But I don't turn my back on her anymore! lol!)

What I've learned in all these years of collecting is "patience is a virtue" and eventually (if you have good doll karma) every doll come back around...and usually at a better price! So I waited....and waited...and waited. Every year I would go back to convention and see if anyone was willing to part with their. My friend JennFL would taunt me with pictures of her raven AND cotton candy pink hair version all the time on Flickr (greedy...just greedy...lol). I even spoke to someone once in a chat room that boasted having ALL the DGs in his collection and when I asked him about the raven pigtail version he said,"Ah, that was probably a re-root or an urban doll legend." I freaked out on him,"NO!" I insisted,"I've seen her in the flesh....um vinyl." I would troll ebay occasionally from time to time...typing her name in the search bar hoping someone would one day put it up to no avail. That is....UNTIL LAST WEEK!

YES VIRGINIA! There is a Santa Claus! After 2 agonizing years...I've finally gotten her in my sweaty little hands! I'm having an Oprah Full Circle Moment right now! This doll represents so much more than just another doll. Lord know I have enough of them. She reminds me of my dear friends. She is a symbol for my first year at an FR Convention. She represents the resurrection of a love for collecting doll for the sheer bliss of it that I had lost many years before. For that and so much more, she will always be PRICELESS to me.
xoxo,
Frank

p.s. By the way, the outfit she is pictured in above never worked on any other doll in my collection (in my opinion). I have this theory that every outfit has the PERFECT doll for it and visa-versa. Finally, Sooki does this beautiful previous convention ensemble the justice it deserves! End of chapter. ;-)
Posted by dolldork at 8:38 PM