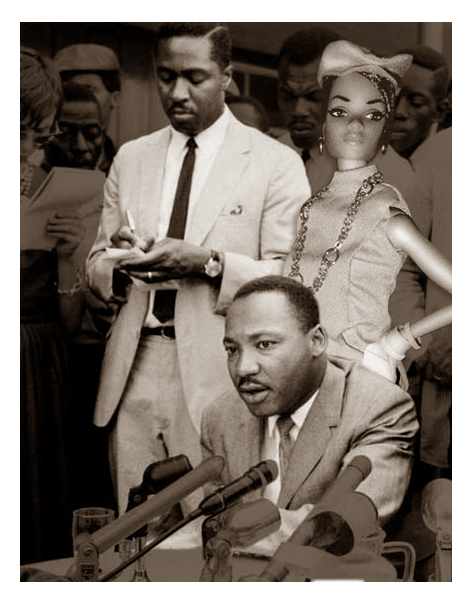 When I was in grade school, my teacher (who's name was Miss. Brown...but she was a blond and that was always very confusing to me) showed us once a reel of the "I've Got A Dream" speech by Martin Luther King Jr. It was 1977 and believe it or not, Miss. Brown got into a lot of trouble with many of the parents because she had showed that speech to a bunch of 2nd graders. It was deemed too controversial.
It had only been approximately 9 years since his untimely assassination, but his words were ringing in the ears of people who still thought of him as a subversive and a rebel. Now years latter, we revere a man who was a visionary and a leader with a national banking holiday and not much else. We forget many of his teachings who's morals still stand the test of time today.
The photo above features Dr. King during a press conference. You can bet that if Darla Daley had been around back in the day she would be lending her celebrity and voice to his cause. So, I thought it only fitting to show the two contemporaries together in this very "rare" picture. ;-)
All kidding aside, I urge you all to take a moment and see the footage below from youtube.com (or read it below) to see the man speaking LIVE. The sound of his voice and his energy was truly awe inspiring. It's been several years since the first time I saw this speech, but the words still inspire me today.

On Martin Luther King Jr. Day...take a moment and ask yourself what part have you played in keeping Dr. King's dream alive....FOR ALL.
"I Have A Dream Speech"
By Dr. Martin Luther King Jr.
I am happy to join with you today in what will go down in history as the greatest demonstration for freedom in the history of our nation.
Five score years ago, a great American, in whose symbolic shadow we stand today, signed the Emancipation Proclamation. This momentous decree came as a great beacon light of hope to millions of Negro slaves who had been seared in the flames of withering injustice. It came as a joyous daybreak to end the long night of their captivity.
But one hundred years later, the Negro still is not free. One hundred years later, the life of the Negro is still sadly crippled by the manacles of segregation and the chains of discrimination. One hundred years later, the Negro lives on a lonely island of poverty in the midst of a vast ocean of material prosperity. One hundred years later, the Negro is still languishing in the corners of American society and finds himself an exile in his own land. So we have come here today to dramatize a shameful condition.
In a sense we have come to our nation's capital to cash a check. When the architects of our republic wrote the magnificent words of the Constitution and the Declaration of Independence, they were signing a promissory note to which every American was to fall heir. This note was a promise that all men, yes, black men as well as white men, would be guaranteed the unalienable rights of life, liberty, and the pursuit of happiness.
It is obvious today that America has defaulted on this promissory note insofar as her citizens of color are concerned. Instead of honoring this sacred obligation, America has given the Negro people a bad check, a check which has come back marked "insufficient funds." But we refuse to believe that the bank of justice is bankrupt. We refuse to believe that there are insufficient funds in the great vaults of opportunity of this nation. So we have come to cash this check — a check that will give us upon demand the riches of freedom and the security of justice. We have also come to this hallowed spot to remind America of the fierce urgency of now. This is no time to engage in the luxury of cooling off or to take the tranquilizing drug of gradualism. Now is the time to make real the promises of democracy. Now is the time to rise from the dark and desolate valley of segregation to the sunlit path of racial justice. Now is the time to lift our nation from the quick sands of racial injustice to the solid rock of brotherhood. Now is the time to make justice a reality for all of God's children.