Grey Skies ARE Gonna Clear Up....THEY'VE GOT TO!

Okay, so the last couple of days has really sucked and that's why I haven't blogged. But, I have a bit of perspective and time on my hands right now (I'll get to that) and therefore I thought I would "pump out a quick one" (all puns intended).
First off, if you read my last blog the small portion at the end was devoted to the puppy we just lost Napoleon. I was amazed at how incentive people can be about the death of a pet. It boggles the mind. Either these individuals are heartless and can't remotely sympathize with the loss of a beloved member of the family (which our pets ARE) or they are just sociopaths in disguise as normal humans. Well, enough about THOSE PEOPLE (and you know who you are) and let's move on to some other crap that has been going down.
For the last two weeks my partner Peter has been complaining of abdominal pain. He is not a complainer…but occasionally a chronic overeater…especially when it comes to his mother's Cuban cooking which he loves so much. So, I thought a couple of over the counter meds and this will be done. No such luck. When he continued to literally belly ache about the pain, I insisted he make a doctor's appointment. He was seen right away and later on that evening our physician let us know that the issue could be a case of Diverticulitis (which I have had friends who have had chronic cases of in the past that have lead to worse things). So needless to say, the worrying started. He was given a round of antibiotics and pain meds and was told that the pain should subside in 2 weeks. It didn't. Peter made a follow up appointment to the Doctor and was sent to a G.I. specialist who concluded yesterday that he had a possible problem with his Gall Bladder. So, right now I write this blog from the waiting room in the Hospital as Peter has a colonoscopy and endoscopy (think three-way…but not the fun kind) and that's why I now have time to write this blog.
To add insult to injury, our dear friend and housemate Quin (who works with us at the www.WhatsHappeningMagazine.com as our Financial Officer) had a major death in her family (an 2 weeks to the date of Napoleon's passing). Quin's mom passed away at 85 (her 86th birthday would have been later on this month on the 31st) quietly in her sleep. I hope that Quin's mom finds peace after the less than peaceful life she unfortunately had while she was on this Earth. She can although be very proud of the incredible women that she raised in her daughters and helped raise with her grandchildren. Sometimes working up to 2 jobs just to make ends meet. Rest in peace Mrs. Porté.
As for me, I went to the dentist last Friday expecting to hear hopeful news about the prognosis of my teeth after my accident a few months ago. Instead, I got hit with the worse case scenario. I'm really scared now, because I really don't like any kind of surgery (not that anyone does) and especially not on my teeth. So, now I need to make some important decisions about how I'm going to handle this dilemma taking place in my mouth (which coincidentally I've always felt has been one of my TOP 5 features).
The only thing that made me smile this week  I will now share with you.
After having a conversation with a 7 year old boy at my Dr.'s office (don't get stoppid…his mom was the receptionist and was right there….I think kid's just like to talk to me because they recognize a kindred spirit that is the Peter Pan that lives inside me…and most gay men for that matter). Well, this very sweet, smart and witty little boy told me about his love for My Little Pony - the new animated series. I thought the show was geared towards little girls and therefore asked him why he like it so much and he said that he liked magic, ponies and the stories. He then went on to tell me that he especially liked Rainbow Dash (she is a Rainbow Maned colored Pegasus (winged pony) who is a bit of "tom-boy". The whole show is about love, friendship and not not only accepting the differences between individuals (in this case ponies) but celebrating them. And, Rainbow Dash, who is obviously the symbol of the GLBT community is the leader of the pack. Upon watching this show a smile came across my face for the hope that the children of that young boys generations will remember the lessons that they've learned by shows like My Little Pony - Friendship Is Magic and will live their lives with the morals they saw on it. By the way, the show has adorable animation and the jokes are clever enough for and adult to enjoy. Am I becoming a BRONY? Possibly…and I'm proud of it.
So, after watching that show I decided that I wanted to ad a little Rainbow Dash to my collection of FR dolls. So I simply typed into to ebay "Rayinbow FR" and a set of incredible Rainbow colored tights came up on the screen. These tights, stockings, gloves and other accessories are made by a seller called  "TheDaughterWhoSews" and she does excellent work that is very reasonably priced. 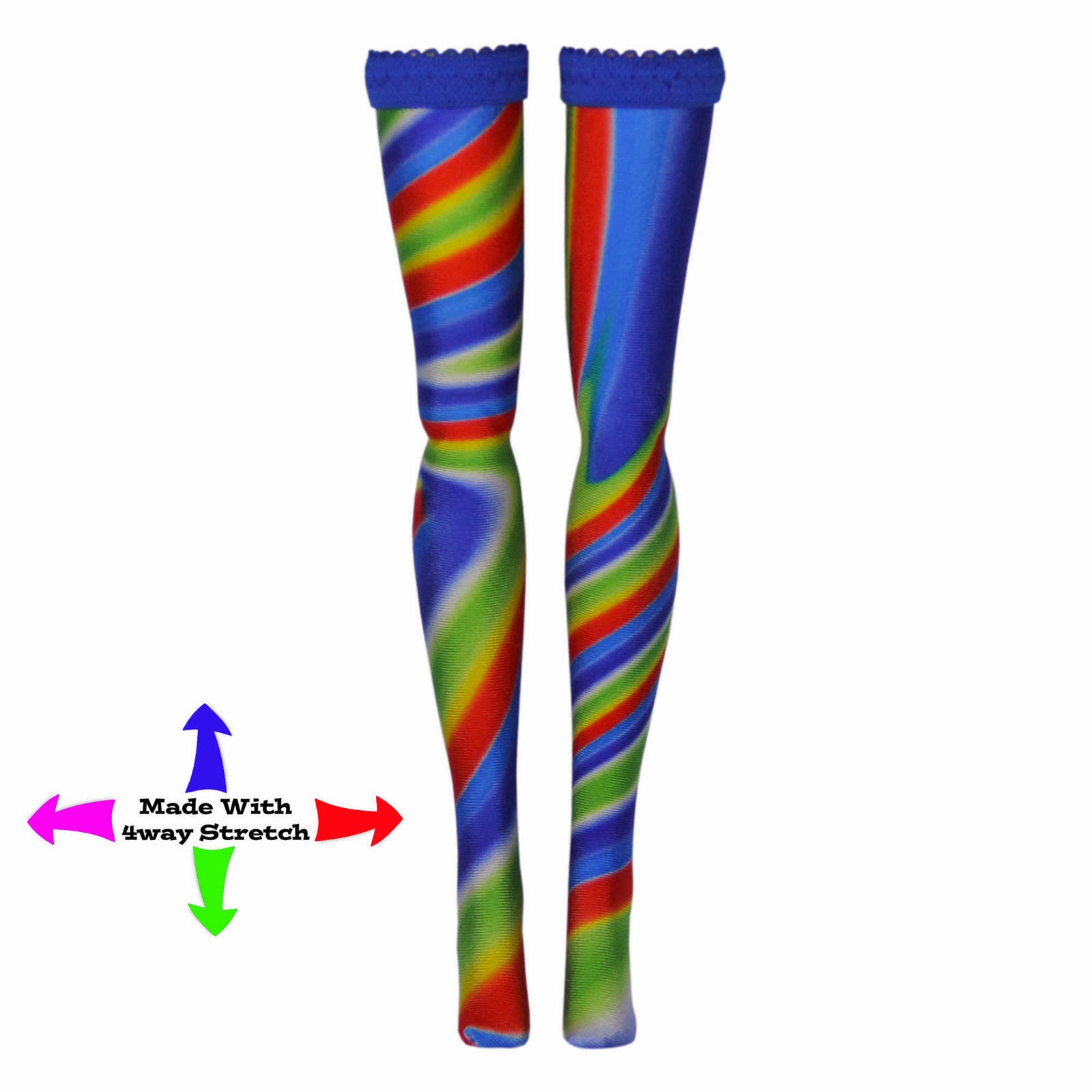 Check her out on Ebay at http://www.ebay.com/usr/the_daughter_who_sews

I bought the tights and they arrived in the mail within a week! That too made me happy so I pulled together the Fashion Royalty equivalent of Rainbow Dash using one of my favorite Dynamite Grils of all time. Enjoy the pics above of Rainbow Dash the Pony and Rainbow Dynamite the doll!
Now, finally the last thing that gave me a HUGE grin (maybe a naughty one) is the next video that was sent to me by a friend on NYE. I had not gotten around to opening it and when I did, I literally LAUGHED OUT LOUD. Now a WARNING, this is an adult themed video. If you are offended by anything that is pornographic and GAY ….I BEG YOU….DO NOT WATCH THIS VIDEO! Ironically is was made by a straight couple who have a friend that is a doll collector. Obviously, this couple and their friend have a very humorous and OPEN MINDED relationship.
I hope you enjoyed the things that made me smile this week….now let's hope the grey skies clear up and there is something better on the other side of the RAINBOW! PLEASE!!!
xoxoxo,
Frank
Posted by dolldork at 12:57 PM