Ru-Tin-Tin or What Becomes Of The Broken Hearted 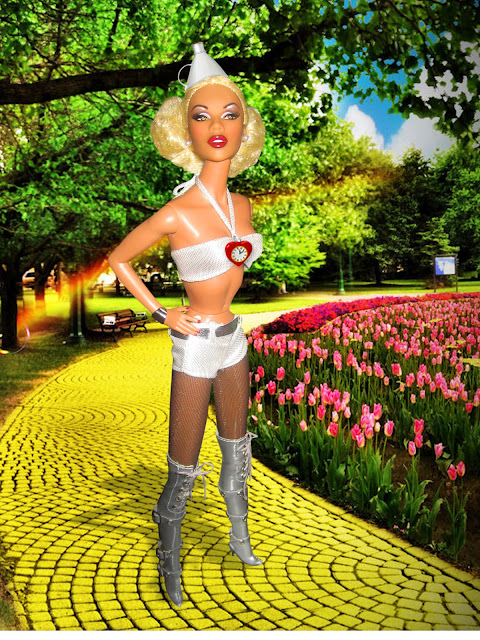 First off, let me apologize for how long it has taken me to get back on the saddle when it comes to writing on this blog. The end of last year saw me overwhelmed by a whirlwind of Drag Queen on the first Drag Stars At Sea Cruise presented by ALandCHUCK.travel featuring 40 of the stars from past seasons of RuPaul's Drag Races on Logo TV. Oy Vey...it was fun and insanity all rolled into one whirlwind week of fabulousness!
Watching this season's show has inspired me to re-do some of my Ru Dolls hair dos so I've been working on those for the last couple of weeks and sharing it with my friends on Flickr and Facebook.
The current hairstyle and re-dress that I did of my current Ru (up top) was inspired by may things that has occurred int he last couple of weeks.
Obviously, one has to do with the upcoming release of the OZ movie that is currently playing at the cinema so I wanted to do an homage to that featuring Ru as one of my favorite Wizard of Oz character's - The Tin Man.
I identify with the Tin Man because he set's out on his quest with Dorothy in the pursuit of a heart. I've had many experience in my life that have cause me to build wall around my heart. Rarely does anyone ever get the opportunity to see (much less get close enough to hurt) the "real ME". For the most part, everyone thinks I'm that funny, brash, superficial, cartoon person that I wear as a mask when I'm in large groups. I hide behind jokes and clever comebacks as a defense mechanism to keep most people at arms length. In the past, once I have let people in too close they have the power to break my heart...and inevitably I find that most people do.
I'm a naturally generous and giving person. I don't expect anything back but friendship and loyalty from the people that I consider close friends. Recently, I've had to learn this lesson once again, and regardless of how old I get the pain of heartbreak hurts as much as it did the first time I ever felt it.
But, this time I learned something, the idea is not to close yourself off and never help others in need again...it is just to be a better judge of who you extend yourself towards and never expect others to pay you back with the same level of kindness, respect and loyalty that you have shown them. Those are intangibles that cannot be measured or quantified. The trick is to not allow situations or others to change the way that you naturally are. I'm going to continue being myself - generous, loving, funny, sweet and open (as much as possible) to others.
As one of my good friends just said to me recently,"when you've been let down by friend...it usually says more about them than it does about you." True words.
Well, that's enough sentimental prattling for one day....now onto other news....
I'm happy to report that I've just paid for my first installment for the FR Convention in the L.A. Convention - The Premiere. We are soooooo looking forward to this convention....for many reason.
First....hello....L.A.! Second, I'll get a chance to see all my doll friends again (especially Luis Rickert who recently moved to California for a job at Mattel!) and finally for all the incredible Integrity Toys swag that comes as a part of your convention package. Nobody does a convention like Integrity Toys.
Counting down the days till October 31st!
xoxox,
F
Posted by dolldork at 9:59 AM